The Open 2014, 2 Rounds down, the cut is +3, some big players are already out like Padraig Harrington and the question on every member of Royal Liverpool golf club is; How are they struggling to keep the ball on the fairways!?
The highest wind-speeds so far have been 15-17 mph and from a local viewpoint, that’s very weak! 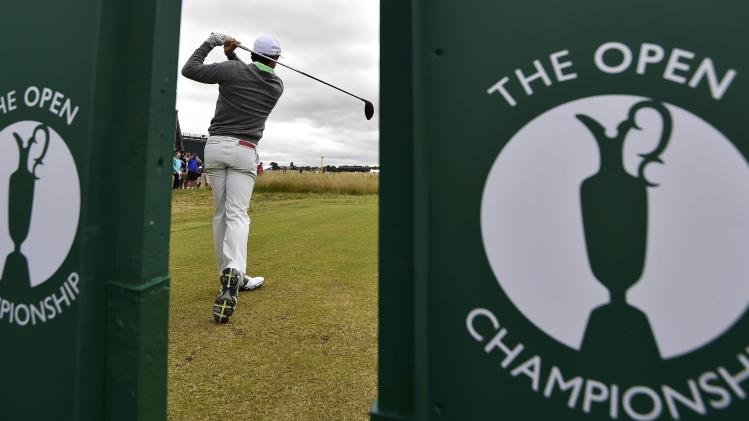 Rory Mcilroy has taken to Royal Liverpool very well, with 2 rounds of six under. Rory seems to have taken to the course very well, knowing when to attack with drivers off the tee, and when to play conservative and hit an iron to avoid fairway bunkers (most of the time). Even after a shaky start to the day, Rory battled to post the second best score of the day, keeping himself ahead by 4 moving into the weekend.

Dustin Johnson being second may ring bells that the long hitters are revelling on this course. Although one big hitter, Bubba Watson has been pretty poor all week long.  Another player who has played poor is Tiger Woods, the 2006 Open, the last time Royal Liverpool played host. However with persistent injuries and Tiger still being in the recovery period is hindering his chances.

World number one Adam Scott has had to push through in the worst conditions on both of the two days, day ones afternoon players had higher winds and then they become the morning players for round two and the wind was yet again stronger for them, an unfortunate piece of luck for some, but that’s the way the cookie crumbles. Adam Scott should be happy at -3 as he is much higher than most players who went out at the same time as him. What’s surprising about the wind is that its not strong, yet all players seem to be struggling to get a grip of it. It could be due to grandstands creating artificial conditions around the tees.

Ashley Chesters, the leading amateur at these championships will unfortunately miss the cut, coming home through 2 rounds with a respectable +3, one shot away from the cut. A shaky start to his second round cemented his position and he was unable to recover at the end of the round.

The course is playing completely different from 2006 as well. 2006 was very dry all week, the fairways had a lot of run and there was little to no wind. With rain coming in the Prior days in the Wirral, the course has maintained a lovely green colour, unlike the brown parched fairways of 2006, this means the course is slower and the winning gameplan of only using driver once in 2006 has gone. The course seems to be playing a risk and reward which creates great action, yet most players are still using irons off the tee and surprisingly they are missing the fairways by long distances. This is even when the winds are no where near as strong as they are most weeks of the year!

The spectators have been great this year, much like last time. Large crowds flooding in and staying until the last players come through, its great to see the Wirral get behind a great tournament. We are happy to welcome the world to our paradise peninsula, the coverage has made the Wirral look brilliants, thank you BBC. One favour, can we have more of that blue line tee shots, its a much better way to grasp where they’ve hit the ball! My Dad and I have loved watching the coverage from that perspective.  We hope you enjoy the rest of the weekend, and we look forward to a great finish in the horseshoe 18th!